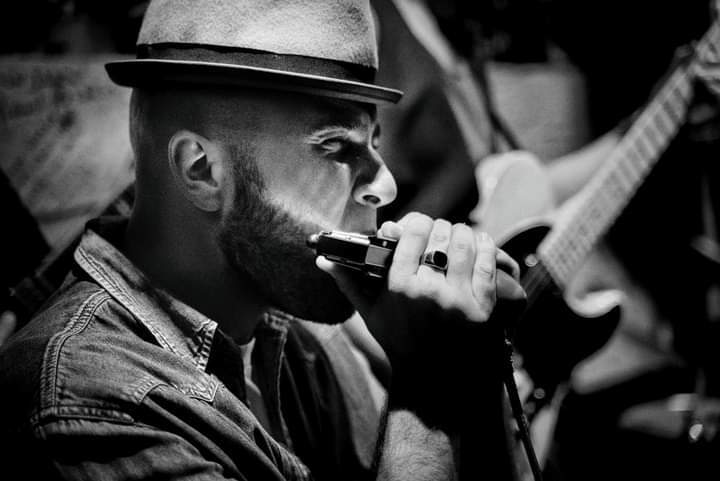 Born in Tivoli (Roma- Italy) in 1994.
At the age of 5 years he began to play the harmonica in churches and thanks to his father (Blues enthusiast and also harmonica player) listens to the first records of Blues by Robert Johnson, Son House, Little Walter, Muddy Waters and lots of other Bluesmen.
In 2016 he began playing in Rome with several bands of the capital including "The Power Shakers" with Marco Di Folco, "Super Motor Oil" with Alex Orelli (guitarist and singer who collaborated with Junior Watson) and with "Hoodoo Doctors" with Simone Scifoni, Lino Muoio and Andrea Ricci.
He often plays with national and international artists such as Max Prandi, Paul Venturi, Charlie Cruz (Bluesman guitarist and singer from Texas), Romain Pinsolle (French guitarist and singer) and in 2019 was part of the record "Root Hog Or Die" with Hoodoo Doctors.
He was also part of the last album "Spookyman & the All Nighters" released in 2021 for Bloos Records.
Andrea Di Giuseppe play also guitar in a delta-blues style. He prefers the Blues of the origins played with bottleneck and among the many bluesman that inspired him there are Mississippi FredMcdowell, Furry Lewis, Mississippi John Hurt, James Son Thomas ,Bukka White, RL Burnside and many other Blues greats.